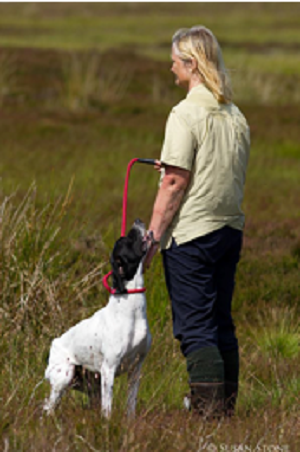 ​I first joined the committee in 2005 and was field trial secretary for ten years. I am currently club president. My main discipline is field trials. My first pointer was obtained in 1984, Bracken of Crookrise. I am currently campaigning Ardclinnis Ella (pictured). I have 13 Pointers, English and Irish Setters in the KC stud book and am an A panel Pointer and Setter field trial judge. ​ 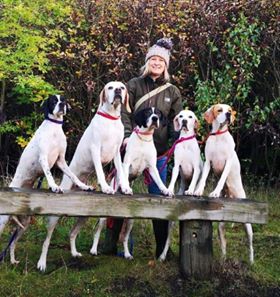 I got my first pointer in 2007 and have been owned by them ever since.
I have 5 pointers at home 3 of which have achieved their stud book number.
I regularly Show, Count and Trial my pointers and have recently started rally …
We have awards in Field Trials which are some of my proudest moments as I love to be out on the moors watching my dogs working with me.
I have judged pointers at open show level for 10 years and am currently on the B list.
I am looking forward to being on the committee and giving something back to our wonderful breed
Mrs Amanda Brooksmith
​ Affix: Nightgold 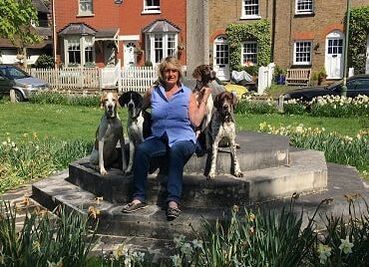 My love for the Pointer started 35 years ago, with a wonderful, sensitive and caring Medogold girl.
I only began showing 10 years ago, and I love it. I now have 4 girls, ranging from 13yrs to 9mths. Two of them are in the KC Stud book, including my Sh Ch Medogold Kiss N' Tell, and I now have a puppy from her.
I joined the committee in 2015, and so enjoy "putting something back" into the breed that gives me so much pleasure. 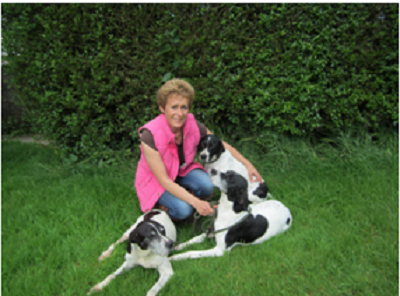 I became involved in Pointers in 1997 and have been competing successfully in field trials and working them on shooting days and grouse counting ever since. I am a Pointer & Setter A Panel judge and have been on the Pointer Club Field Trial Standing committee for the past 12 years. In January 2017 I became Honorary Field trial secretary of the Pointer Club.
Hon. Treasurer
Publications Editor
Mrs Trish Eldridge:
​Affix: Bradgate
1, Holly Hayes Road,
Whitwick, Coalville, Leicestershire LE67 5GG 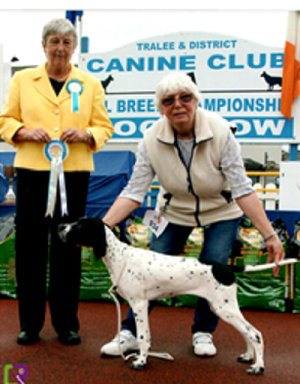 ​With Violet (Bradgate Takes the Lead) in Ireland
​
​ I have owned and shown pointers for thirty years gaining ten KC stud book entries. My main interest is in breeding and showing and I have one Show Champion and one Irish Show Champion.  My first pointer and foundation bitch was bought in 1986 (Good Golly Miss Molly), a daughter of Hazelbarrow Larry, and currently I live with Violet (Bradgate Takes The Lead, pictured) and Ruby (Bradgate Vanity Fair) I joined the committee in April 2005 and am currently club secretary and publications editor. I award CCs in Pointers
Ruth Francis
​Committee Chair
Show Manager
​Affix: Feebrick I had my first Pointer in 1978 from the Hazelbarrow kennel and he was soon joined by two litter sisters from Gill Russell (Swan dance).
Swan dance Dusky Morn produced Feebrick Another Prospect and F. Annabelle, both gaining a CC and Annabelle also having a RCC.
I joined the PC committee in the 1980s and was the trophy steward and used to organise the Christmas rallies. I resigned as I was furthering my career in the NHS.
Then came Freebreeze Fine Romance and later F. New Englander with a whippet in between.
Due to the untimely death of Frankie I was without a dog until March 2019 when Linda, a miniature Smooth Haired Dachshund joined me here in the Lincolnshire countryside, soon followed by another mini smooth from the Stargang kennel.
I award CCs in Pointers and judge the Gundog group at Open shows.
By being on the committee I can retain my links with our wonderful breed which has given me so much pleasure over the years. Currently I have reprised my role as Trophy steward. ​ 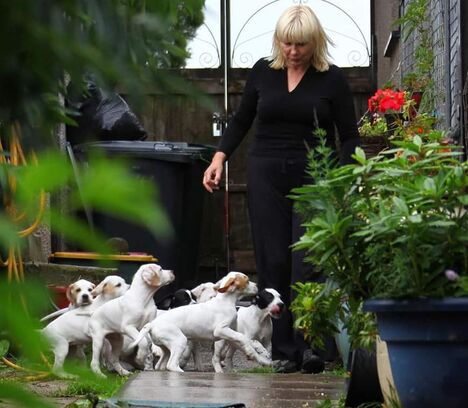 Our first Pointer arrived in 1984, having previously shown a Golden Retriever. I served on the Committee of the local canine society for around 10 years including several years as Secretary. I have been a Championship Show Judge since 2005 and have also judged in the USA, Spain, Australia, NZ and Hungary. I have bred 3 UK Show Champions and several overseas Champions and have owned 10 Pointers in the KC Stud Book plus several others bred by me but owned by others. I have a great interest in pedigrees and breed history and was pleased to be co-opted onto the Committee to assist in building a record of the breed. 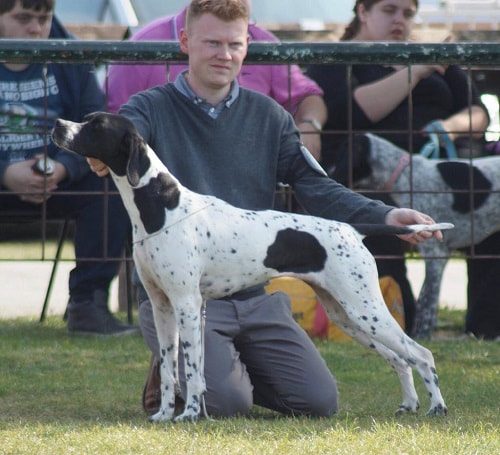 ​I have been involved with Pointers for over 13 years. I started off handling other people’s dogs when I couldn’t have dogs of my own at home. I have made up a Champion Pointer in my own right that carries my Riowood affix and owned and bred Champions in conjunction with my wife and mother in law under the Sharnphilly affix. I have won CCs; championship show group placements and also handled a Pointer I showed to his show gundog working certificate which I am immensely proud of. I am approved by the Kennel Club to award CCs in Pointers with my first appointment being next year. I have previously served on other Committees and am passionate about all things Pointer.  I look forward to serving on Pointer Club committee to give something back to the breed I love and enjoy helping out in any way that I can.
Mrs Carolyn O'Neill
Affix: Tenshilling 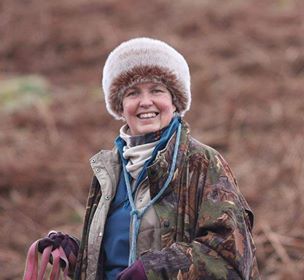 TENSHILLING POINTERS.... I have been involved in the wonderful world of dogs for approximately 40 years, initially an Irish Setter, English Setters for 15 years and then finally came to my senses and I bought my first Pointer in 1993 from the well known, Hurwyn, English Setter and Pointer kennels of Sue Wilkinson. That beautiful orange/white dog puppy, despite my inexperience, became Ch Hurwyn Skuba Diver JW and he is behind all of the current Tenshilling pointers. I have been lucky enough to have owned/bred two full Champions, a Show Champion an Irish Show Champion and others that have gone on to win Challenge Certificates and Reserve Challenge Certificates, Junior Warrants and ShCM's.... not forgetting the much loved family pets dotted all over the country <3
Mr Roger Perkins
Health & Safety officer 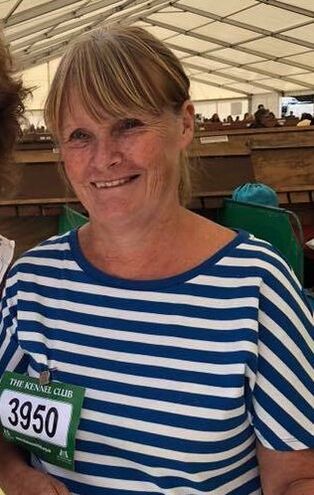 ​I have owned pointers for 40 years now, my first was a rescue and have been smitten with the breed since then. My first show pointer was a lovely liver and white bitch from Gordon and Linda pimblett  and-that was  me hooked ! 4 years later I had my first litter and have been showing ever since.I am at the moment waiting to hear confirmation from the kennel club to give my first set of c.c in 2020 after judging for many years. I am currently on carlisle and district canine commitee, and feel now retired I have more time to offer I would like to join the committee of the pointer club to put back into the breed I love so much.
Webmaster
Ms Lynda Rayner
​Affix Spinray 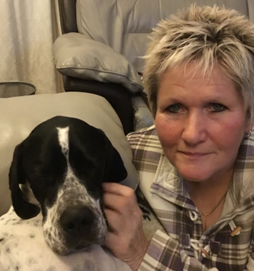 My main interest is showing. I have been involved with showing for around 30 years.  I was introduced to my first pointer 17 years ago. As a kennel we have over the years been lucky enough to own several dogs that have done well in the show ring. At present we have three stud book entries, and are proud to have run on and made up Sh Ch Freebreeze Over The Top at Spinray (Tommy).
I share my home with 5 pointers, who love nothing better than running free, eating and sleeping! Pointers have become the love of my life, and I feel very honoured to serve this wonderful club that represents the breed so well!
Mrs Anne Smith
​Cup Steward
Affix: Fydal 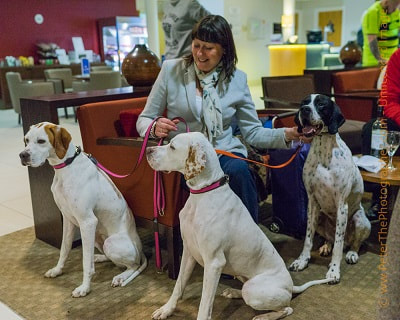 Firstly can I say a huge thank you to all the members who voted for me in 2020 so I could become part of the Pointer Club Commitee.
Having loved and owned this breed for over 30 years I hope I can be of some help by putting something back into the world of Pointers as a commitee member.
I show when I can and really enjoy training days as I adore being out on the Moors watching Pointers do what they were bred for......But most of all I love my 4 Pointers aged from 5 to 12 years old and the companionship they give on our long walks together. I just would not be without them or the friends I have made by being involved in this Breed....

Mr Andrew Swannell
Hon. Secretary
58 Wolverton Road
Haversham
Milton Keynes
​ MK19 7AB
Affix: Rickory
I have been involved with dogs for nearly 40 years and my interest has always been in showing although if I had my time again, I would be venturing down the working route.
My first breed was English Setters and I have also owned and shown Welsh Terriers.
I have been involved with Pointers for six years and wonder how I never became owned by our gorgeous breed a lot earlier.
Sharnphilly Rio Bella was our first Pointer  and rules the roost over the two we retained from her first litter and the three English.  She has given me a good introduction to the breed and I want to build on that.
I have been involved in committee work most of those 40 years and I am delighted to have been given the opportunity of serving our lovely friendly Pointer community. 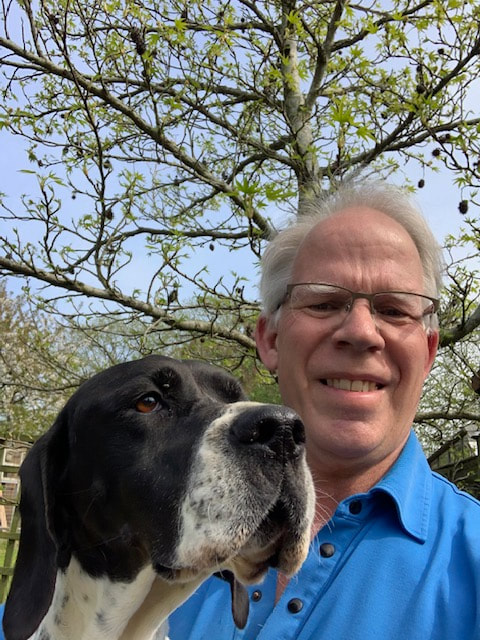 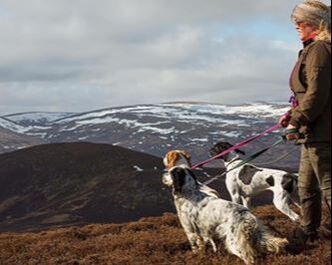 Growing up, our family had toydogs, but at 16, I owned my first gundog. By the late 80s, aswell as working my dogs in the shooting field, I entered back into the showring with Vizlas and IRWS. Whilst competing I became fascinated with the Pointer, so in 1994 I had my first - from pure working lines. This was the start of my love of the breed.
My interests are very much dual purpose - I love to see dogs do the job for which they were bred and enjoy competing at Field Trials and also grouse counting with my dogs. I also like to have dogs that fit the breed standard and are capable of giving  good account of themselves in the showring.
​I currently have one FT bred irish setter and four pointers, two FT bred, one is half FT / half show, and one more show bred.